and How to Solve Them

We’ve all lost sleep over smoke detector problems at one time or another. I mean, who hasn’t been awakened by a beeping smoke alarm at 2:00 in the morning? Not to mention the pleasure of dealing with a fire alarm that decides to go off randomly, at any hour, for no apparent reason.

Well, take heart! As random as this annoying behavior can be, there are specific reasons why it occurs.

This page shows how to handle fire alarm trouble while it's happening.

To avoid trouble before it happens, see this article on Preventing Smoke Alarm Problems.

Here are some of the most common smoke detector problems and their causes, along with some simple steps you can take to fix them if they happen to you.

Beeping or chirping smoke alarms happen much more often than detectors actually going into full-alarm. Luckily, these problems are often easy to fix.

The most common reason for a chirping smoke detector is a low battery condition. Batteries can be used as the main power source for some detector designs, and are very often used as a backup.

These days, most fire alarm manufacturers make it easy to change the battery. For example, many First Alert smoke detectors feature an easy-to-open, swing-out battery tray. Kidde smoke detectors also often have the battery compartment easily accessible from the front of the unit.

Some smoke alarms must be removed from the wall or base plate to access the battery from the back. If you’re not able to do this yourself, consult an electrician.

Once you have access, replace the battery with a fresh alkaline cell, or the type specified by the manufacturer.

In most new construction, 110-volt AC electrical wiring connects all the hard wired fire alarms in the house together on the same circuit. This type of interconnected fire system allows any single detector to trigger all the others in case of a fire.

A tripped circuit breaker will often cause a 110-volt hardwired smoke detector to start beeping. It will continue to beep, running on its backup battery, until AC power is restored.

If you suspect this is the problem, check all the breakers in the panel box. If you find one tripped, reset it. If the chirping stops, you’ve likely solved the problem. Keep an eye (ear?) on the smoke alarms for a few weeks afterward. If the same breaker trips again, the breaker itself probably needs replacing.

A loose connection to a wired smoke detector will cause a trouble condition. This will cause the units to emit chirps until the problem is corrected.

In these situations, have an electrician check the units and the smoke detector wiring. Or, if you're fairly sure you have a bad smoke alarm,and you're a handy person, check out my page on replacing electric smoke detectors.

All smoke detectors have a fixed life span, usually around 10 years. After that, they should be replaced.

One small problem: Almost nobody remembers exactly how old the fire alarms in their houses are (Do you?).

Fortunately, technology comes to the rescue. Many modern smoke detectors will begin beeping an "end-of-life" warning when their useful lifetime is up. Most will chirp in a particular sequence or pattern, different from the “low battery” chirp.

Check the user manual for your model of smoke alarm to determine if the chirp pattern indicates that replacement is needed. If it is, fire alarms having this feature also have a way to temporarily silence the chirping until you can locate a replacement detector.

For more help troubleshooting, see this article on “How to Stop a Beeping Smoke Alarm”.

Instead of beeping, you may have a smoke detector going into alarm for no reason. False fire alarms like this can have many causes, but here are a few of the most common.

Even the cleanest homes can have dust, and it is one of the biggest causes of smoke detector problems. The trouble starts when dust finds its way into a smoke detector. Dust particles can reflect light inside photoelectric smoke detectors, just like smoke particles do. This creates false fire alarms, which can occur at random times of the day or night.

For fire alarms tied to a home alarm system, use your code to silence the loud siren. For other types of detector, use the “hush” or “silence” feature, if possible.

If your smoke detectors continue to go into alarm for no apparent reason, try cleaning them as a first step. It costs almost nothing to do this, and it may solve the problem completely. For details on how to do this, see the cleaning section of “System Sensor Smoke Detectors”. 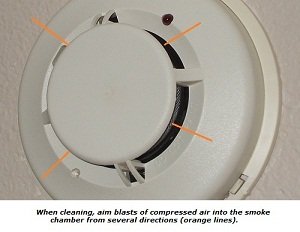 If you have low-voltage smoke detectors connected to a home security system, call your alarm company.

Your electrician or alarm technician will be equipped to clean the problem detectors, or if needed, replace them.

Water is a fairly common cause of smoke detector problems. As water vapor, it can billow out of a hall bathroom after a hot shower is taken. The water vapor mimics the effect of smoke, and causes the alarm to go off.

Steam usually will dissipate quickly, allowing the detectors to reset. Smoke alarms connected to a home security system may need a reset command to be entered at a keypad.

Water leaking in from the roof will tend to collect on the drywall of the ceiling. If a fire alarm is installed near the leak, water can trickle into the unit. There it can cause corrosion, damage to the smoke detector circuitry and electrical wiring, and false alarms.

If water enters any smoke detector, replacement is usually the only option.

Burnt popcorn has probably caused more smoke detector problems than actual fires have. Cooking vapors can trigger a smoke alarm, and too much of it can leave a residue inside the unit. This will eventually make it necessary to replace the detector.

If burning food does set off your fire alarms, open some windows and turn on the vent fan above the stove. Once the smoke has cleared from the house, standard 110-volt detectors will stop sounding.

If you have smoke alarms tied to your home security system, enter your code at one of the alarm system keypads only once, in order to silence the sounder. Open windows to clear the smoke from the house. After the air has cleared up, use your code or reset command at a keypad to reset the smoke detectors. 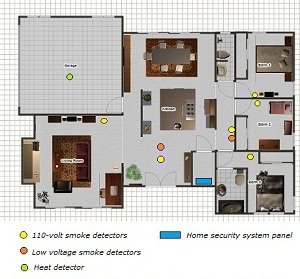 If cooking smoke is an ongoing problem, you’re smoke alarms may be located too close to the kitchen. For more information on where smokes should be located, see this page on smoke alarm placement.

Bug sprays used by some pest control companies can release fumes that will set off fire alarms, and should not be used close to them.

Many cleaning chemicals contain ingredients that will trigger false alarms in smoke detectors.

Paint can contain volatile carriers that can cause smoke alarms to trip. Oil-based paints are worse in this area; latex-based paint is usually not an issue.

If chemical or paint fumes do set off your fire alarms, follow the steps above under “Cooking Smoke”. Clear the room or hallway of any chemical fumes, then reset the smoke alarm if needed.