Here are some of the more commonly used home security terms. Scroll down to find what you’re looking for, or…

Search for a term by entering it into the “Search this Site” box at the top of any page.

Have a term you don’t see here? Contact Me, and I’ll include it here.

For more general questions, try the FAQ section. Links to both the FAQ and Home Security Terms Glossary sections are also in the side navigation bar and in the bottom footer block of every page.

System that connects to standard magnetic contacts using wires. Hardwired systems are very reliable, but can't be installed in all situations.

System that connects to wireless transmitters using radio frequency (RF). Most wireless systems do need some wiring, usually for power, phone or data line, and sometimes a hardwired keypad.

Any device that combines two or more technologies. In the alarm business, used mostly to refer to hybrid panels that use both wireless and hardwired zones.

The first line of defense for a security system, typically consisting of the doors and windows that allow entry into a house.

Perimeter protection can be armed whether you're at home or away.

The second line of defense for an alarm system. Includes motion detectors, glassbreak detectors, and interior doors. Interior protection can only be armed while you're away, since any movement inside the home would be detected and trigger an alarm.

Glassbreak detectors can be used as either interior or perimeter devices, depending on the specific model, and level of activity inside the home. Using glassbreak sensors for perimeter protection can result in false alarms unless they are planned for carefully.

Some alarm panels can be split into two or more partitions, also known as areas. Each partition consists of several zones in the same section of the protected premise.

Partitions can be armed and disarmed independently from one another.

Partitions require some additional programming, and usually an extra keypad for the new area. You may also need to keep track of a second arm/disarm code for each partition, depending on the panel brand.

A feature offered on several brands of security panels, including the Ademco Vista 20P. It allows a single set of zone terminals to connect two separate hardwired loops.

The main advantage is that you can connect more zones on the panel without buying a separate zone expansion module. This could be a real money-saver if you're a do-it-yourselfer on a tight budget.

The biggest disadvantage is that it can be very confusing to troubleshoot if you later have a problem with one of the doubled zones. For that reason, I'm not a fan of using zone doubling. 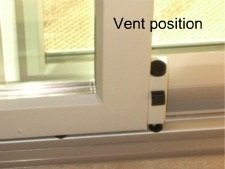 A window or door that can be left partially open a few inches for ventilation, while still allowing the alarm to be set.

It can only be done to sliding doors and windows, and involves adding a second magnet. The second magnet is offset from the first, and activates the switch to close the zone. Opening the window past the vent position triggers an alarm as usual.

Learn more about Adding a Vent Zone to a Home Alarm System.

A window without a moving section or panel. Also referred to as "fixed glass".

Fixed windows can't be protected with a standard window switch, so a glassbreak sensor or other type of fixed-glass protection must be used.

A door, window, or other moving panel that can allow access in and out of a house.

Also referred to as an "opening" or an "operable". Most doors are movables, or have a moveable portion like a set of French doors.

Many windows have a moveable half, with the other half being "fixed". Other windows are a single fixed section.

Most movables can be protected with a standard magnetic door switch or window switch.

Making a point of protection in an alarm system inactive. The panel will ignore shunted zones, and they create no alarm response if faulted.

Motion detectors are often automatically shunted when an alarm is armed in “Home” mode, and become active the next time the panel is armed in “Away” mode.

Zones with damaged wiring, contacts, or other alarm problems can also be bypassed until service can be arranged, reducing false alarms.

An alarm switch that "swings" randomly from open to closed and back to closed, regardless of the condition of the door or window it protects. This is usually caused by a worn out contact that is failing.

An security panel feature that detects multiple alarms from a zone and automatically bypasses that zone to prevent more false alarms from occurring.

This type of zone will normally reset to normal operation during the next arming cycle.

Special command available on some panels to cause it to bypass a normally non-bypassable zone.

Devices designed to sense the breaking of window glass.

Vibration detectors attach directly to the glass and use mechanical contacts that behave like an open switch when disturbed. This is older technology, and not used much anymore.

Shock Sensors attach to the glass and detect the sharp impact usually associated with a window breaking. Used most often when shutters or heavy drapes prevent the use of audio discriminators.

Audio Discriminators are electronic sensors that listen for the frequencies for breaking glass. They don't need to attach to the glass, but must be within their rated range of the window. These are often chosen because they can cover several windows at once, saving costs.

Note that most glassbreak detectors are not designed to detect cutting of the glass.

Glassbreak sensors are normally considered to be interior protection, though in some cases they can be used for perimeter protection.

An opening report is normally sent to the central monitoring station when an alarm system is disarmed. A closing report is sent when the panel is armed.

Some panels can also send “Close with Shunt” and “Opening after Alarm” signals.

For more details, see this page on Opening and Closing Reports.

The home security terms “Opening” and “Closing” are holdovers from the days when most alarm systems for business use became popular. Shop owners were able to know when their stores opened and closed, keeping their employees on the ball.

Nowadays, alarm systems for the home include the same feature to let you see who comes and goes. Family members, cleaning crews, repair people, etc. are each assigned a unique arm/disarm code, allowing you to track who’s who.

Self-monitoring means that your alarm panel reports to you directly, without going through a central station or other alarm monitoring service. Reports are typically sent to a pager or cell phone.

Not all panels support this feature, and those that do often have limitations on what they can report.

Find out more here: Should You Self Monitor Your Alarm System?

Common use: Redundant reporting to both the alarm company and the main central station. Used by a security system company to check activity on select accounts.

Alarm panel feature allowing it to send signals to two different receivers, based on the signal type.

Common use: Send Low Battery and other maintenance signals to a receiver at the alarm service department, while sending all other signals to the alarm monitoring company.

The use of cameras to monitor activity in an area. Video from cameras can be viewed live, and may also be recorded using a time-lapse recorder or a digital video recorder (DVR).

If you need just one or two cameras, many do-it-yourself packages are available that include cameras, a monitor for viewing, and all cables and accessories.

If you plan on having several cameras, a little planning will help you get the most "bang for your buck".

- Choosing the correct camera type and placement will give the best possible viewing angles.

- Matching the recording device to the cameras will give you the best combination of high-quality video and maximum recording time.

To find out more, see this page on home security camera systems.

Fixed LCD displays have a limited number of preset letters and symbols available.

Programmable LCD displays can be programmed to show any numbers or letters in any combination.

Light Emitting Diode - Keypad technology used to display system and zone status. These are cheaper to produce than LCD displays, but are only able to show basic information about the system.