Napco security systems have been protecting homes and businesses for more than 35 years. They are made by Napco Security Technologies, a leading manufacturer of security products ranging from intrusion and fire protection to video and access control.

The company now offers many cutting edge, high tech security products, but it has its roots in much simpler technology.


Many people may know the Napco alarm name from the Magnum Alert series of alarm panels. Although they're now long out-of-production, these were some of the most popular systems in the 1980’s, during my early days of installing alarms.


If you happen to have one of these old systems, this page is for you. I’ll give you some basics on the different systems, some tips to help you keep an old system running, and how to know when you should start thinking of replacing your system.

The Napco Magnum Alert line are microprocessor-based residential burglary and fire panels. They all use removable PROM chips (Programmable Read Only Memory) to hold the basic programming information. They also need 10-conductor cable to run the keypads!

The major models are:

By today’s standards, a hardwired security panel with only 6 zones and no expansion capability seems primitive.


However, for its time, the Magnum Alert panels were a step up from the earlier 2-zone systems that came before them.

I’ll wait here while you read that sentence again.


It seems hard to believe now, but the earliest panels I installed only had one delay zone and one instant zone. This made troubleshooting a bad door or window switch quite a challenge, especially on a larger house.


So, you can understand what a luxury it was for me to have 4 zones to play with on the MA 800 and MA 825. Although they are 6-zone panels, they actually had only 4 zones available for perimeter protection. The other two were typically dedicated to “Panic” and “Low Battery” functions.


Typical zoning for these Napco alarm systems was often as follows:


For a large residence, this still didn’t give very good zone breakdown, but it sure beat only two zones! 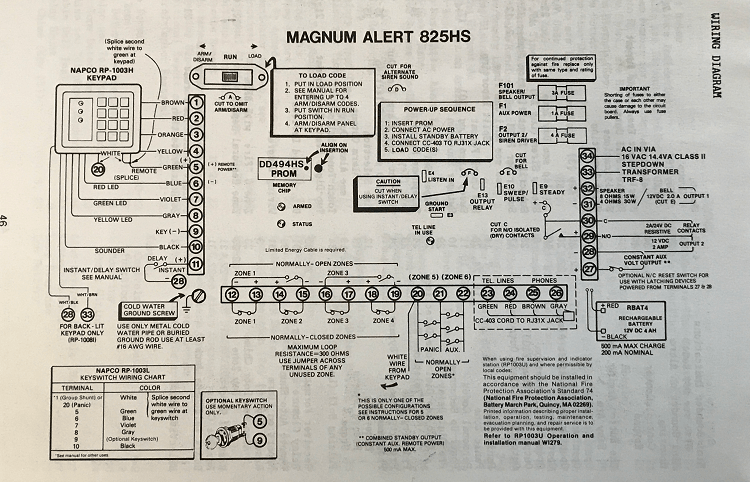 If you happen to have an old MA panel that still works, congratulations! If your Magnum Alert system is having problems, you may still be able to keep it going for a while longer. Here are some of the most common problems, along with the best solutions I know of.

The Napco security systems keypads for the MA systems have a tendency to wear out after several years, specifically the buttons. This problem is accelerated for keypads installed outside or in a garage, where heat can cause them to fail sooner.

The quick and cheap solutions:

If you have more than one keypad, you can swap the bad keypad with another one that is working.


If you only have a single keypad installed, you can re-program the code to use different digits than the one(s) that have failed.


Of course, both of these options will only work for so long, and in fact may have already been done by a previous homeowner.

Buy a replacement keypad kit at Amazon.com or any of several alarm suppliers online. There are two versions: The Napco security part numbers are RPKIT-3 and RPKIT-9.

These kits contain the “guts” of the keypad, including the buttons. You simply remove a screw and unplug the ribbon cable, swap out the old part, and substitute the new one.

At this point, enough time has passed that most online alarm product distributors no longer have any RPKIT-3's in stock, and there won't be any more coming.

If you have an older Napco system in need of one of these keypads, I suggest looking for a replacement system instead. The time and money spent trying to source parts and refurbish a system as old as this would be better spent on a newer system.

If you ever want to change the zone programming, fallback code, or reporting information for your Napco home security system, you’ll need to program a new PROM for your system. You can download free alarm programming manuals through the link at the end of this page.


The various PROM chips for each model are available, as is the Pro-410M programmer needed to “burn” the chips. The chips run about $30 each, and the programmer costs around $100. 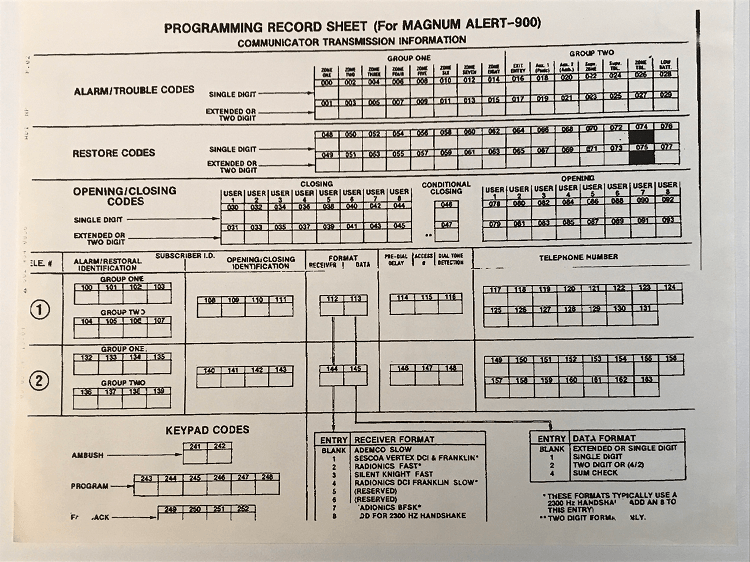 PROM’s cannot be erased like "electrically erasable" PROM's, or  EEPROM’s. This means that once data is burned into a PROM, it’s there forever. If you make any programming mistakes, you’ll quickly start running into serious money.


Come to think of it, if you buy the programmer and a couple of PROM chips, you’re already into serious money!

Very few alarm hobbyists (and even fewer homeowners) are brave enough to fool with programming these old Napco security systems.

If you require PROM program changes, the easiest solution is to contact an alarm dealer. They can either perform the programming changes you need, or more likely recommend a newer system.

Like all alarm systems, older Napco security systems will require a battery replacement about every 3-5 years.

These panels can all use the standard 12-volt, sealed lead-acid (SLA) rechargeable alarm batteries. Either the 4AH (Amp-Hour) or 7AH units will fit easily in the alarm enclosure.

If you’re in an area subject to frequent power outages, it's a good idea to use the larger capacity 7AH unit.

As these older systems accumulate years of wear and tear, you'll reach a point when it's just not worth putting any more money into them.

Here are some things to consider when deciding to repair or replace a system:

If you decide your older Napco security system is worn out, and you’re not willing to put any more money into it, it’s time to replace it.


The good news? You may be able to re-use most of the hardwired door and window contacts, motion detectors, and sirens from the old Napco security system with a new panel and keypads.


Hardwired devices are fairly generic, and will work with almost any new panel designed to use hardwired contacts. Depending on the age and condition of the devices, you may have to replace a few of them. But, the wiring is already in place, which is often the most difficult part of installing a hardwired system.

To find out how much it would cost to replace your old Napco security system, just fill out the form below. You'll receive estimates by email, with no obligation to buy anything.