How to Avoid Fire Alarm Trouble Before It Happens

The most common smoke alarm problems will cause one of two symptoms: A beeping smoke alarm, or one that sounds an alarm condition for no apparent reason. 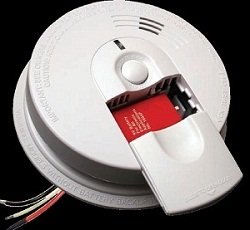 This page focuses on preventing smoke alarm trouble before it happens. If you already have a smoke detector showing one of these symptoms, check out this page on smoke detector problems and how to solve them.

If you have a detector that’s beeping, but aren’t sure which unit it is, see “How to Stop a Beeping Smoke Alarm”. 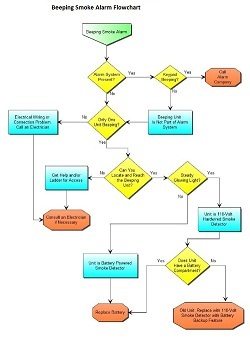 If you have a bad 110-volt detector and want to change it out yourself, see this page on replacing electric smoke detectors.

Smoke detectors are the most important life safety equipment in our homes, and they protect us from fire 24 hours a day. They’re effective, relatively cheap, and are very reliable.

There are two main types of smoke detectors:

Ionization smoke detectors are sensitive to much smaller particles, smoke or otherwise.


Both types of smoke detectors can experience problems. Most common smoke alarm problems can be avoided by taking simple steps. Some of these you may already be doing; others, you may not have heard of.

Here are my recommendations for making your smoke alarms last longer and keeping them trouble-free.

Replace batteries in smoke alarms promptly when they begin chirping. Even better, schedule annual battery changes for all battery-powered detectors in the house. This means any 110-volt fire alarms with a backup battery, and could also include carbon monoxide alarms if you have any.

Many smoke alarm problems are caused by common household dust. Even the cleanest homes still have some airborne dust particles, and these can cause false alarms in smoke detectors. 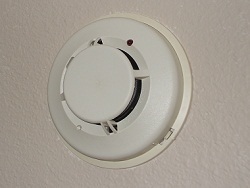 Regular cleaning is the best way to avoid dust problems, and can be done at the same time as scheduled testing and/or battery changes. You can use a shop vac, standard vacuum cleaner, or canned air to remove accumulated dust from your fire alarms.

For details on how to do this, see this page on System Sensor smoke detectors.

Paint fumes near smoke alarms can cause them to go off, especially if the paint is sprayed rather than applied with a roller. Oil-based paints are worse for this than latex, but both kinds have been known to trigger false fire alarms.

Drywall dust stirred up during typical remodeling work will find its way into fire alarms.

Wood floors must be sanded during installation or refinishing. This generates a lot of fine dust particles that are notorious for causing smoke alarm problems.

Before starting any of the projects above, call your alarm company for advice on how best to protect your smoke alarms. If your security system is monitored, they can put your system on “test” at the same time. That way, even if a smoke detector is tripped, the alarm won’t cause the fire department to be dispatched.

The easiest way to protect smoke alarms is to wrap each unit completely using plastic wrap or a bag. This can be held in position with painters’ masking tape or rubber bands.

Covering a smoke detector eliminates your protection from fire.

If you DO cover a detector, don’t forget to remove the covering as soon as possible after completing any painting, cleaning, or sanding operations!

Before uncovering the fire alarms, sweep or vacuum up any dust present. Open windows and turn on fans to clear the room air as much as possible. 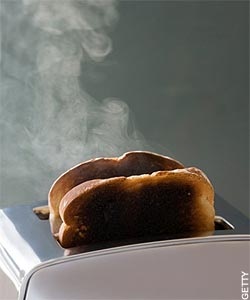 Vapors caused by frying or burning food can set off smoke alarms, especially if a detector is located near the kitchen. To help avoid smoke alarm problems when cooking:

Test all of your smoke detectors regularly, using the “Test” button on units that have them. If a unit fails, try installing a fresh battery. If it still fails, replace the fire alarm.

Be especially leery of any detector that won’t reset promptly after testing. A unit that trips even after you’ve tested and allowed it to reset is often going bad, and may fail soon and/or cause false alarms.

If you have fire alarms tied to a home security system, they may not have a test button on the front. Many units used by alarm professionals require testing with a magnet or other special method. Consult your alarm company about how to test the alarms, and have them do the job if you’re not comfortable with the procedure.

Battery operated smoke detectors can easily be added anywhere in the house, but resist the urge to put one inside or very close to the kitchen. As mentioned above, this can invite smoke alarm problems while cooking.

Heat detectors are the preferred method of fire protection for kitchens. They aren’t affected by smoke or vapors, but still detect a rise in temperature should a fire occur. 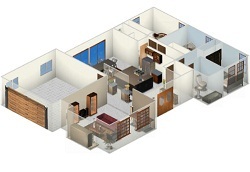 Never locate smoke alarms in garages or carports. These areas are usually dusty, and may gasoline and oil fumes. Like kitchens, these areas should have a heat detector instead.

Install any new fire detectors away from bathrooms with a shower, to avoid smoke alarm problems from steam.

For more information on where to install fire alarms, see this page on smoke alarm placement.