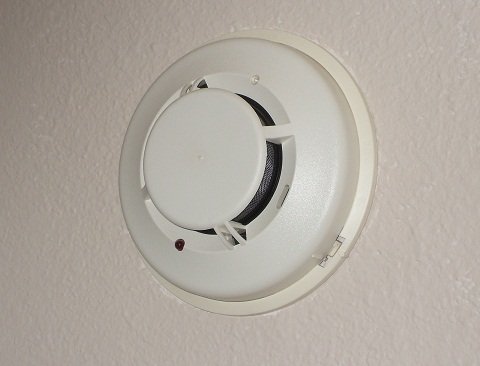 A smoke detector circuit is built into many home security systems. Also known as a "smoke loop", this circuit uses low-voltage smoke detectors, powered by the alarm system panel.

Unlike standard 110-volt home smoke detectors, which only make noise at the house, the low-voltage units allow fire alarms to be reported to a central monitoring station. Help can be on the way almost as soon as smoke is detected, often before the occupants are aware of it.

Some panels that support fire alarm connections only provide a single set of terminals. Often though, it's necessary to pull more than one smoke wire to reach all the detectors in the system. See how to handle this situation here: Smoke Detector Wiring - Connecting Multiple Runs.

In many areas, electrical and fire codes require the use of special fire-rated cable for connecting residential smoke detectors. This “fire wire” has jacketing material that is rated to withstand high temperatures longer than standard wire, so it should be the last to burn in case of a fire. This gives the system a better chance to alert occupants and transmit a report to the central monitoring station.

Fire wire is normally 22-gauge for residential use, and can contain either 2 or 4 conductors.

is completely separate from the standard 110-volt smoke alarms, and is wired in a specific way.

The security panel is designed to sense any problems on the smoke detector circuit. These trouble conditions can include:

The ability to sense problems like this is called “supervision”. Supervised loops often include an “end-of-line resistor”, EOL resistor, or just EOLR. This resistor is located at the end of the wiring run (oddly enough), and is used to detect a shorted condition.

The System Sensor smoke detector circuits, shown below, are typical of most other manufacturers. 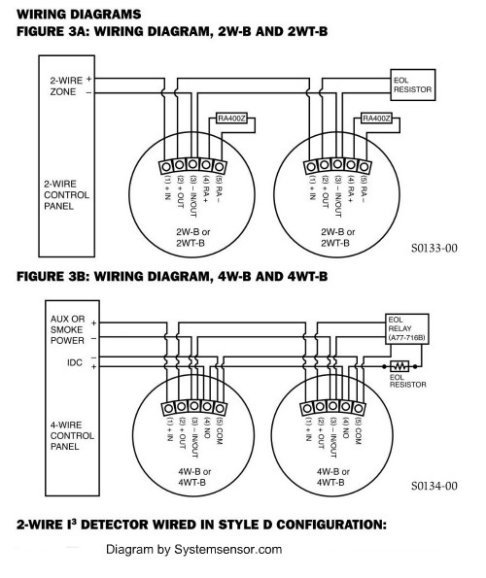 The diagram shows the two basic types of smoke detectors, 2-wire and 4-wire. Most home alarm panels are designed to handle one type or the other, but some can handle both. Here’s how they work:

Power to operate the smoke detector is supplied on the same 2 wires as the detection circuit. A 2-conductor cable goes from the main panel, connects to each smoke in sequence, and terminates with an EOLR at the last detector.

In normal operation, the alarm panel “sees” the EOLR, so it “knows” that all the connections are good. If the detector senses smoke, it creates a short across the pair of wires, and the panel goes into alarm.

If a wire is cut, or pulls loose from a screw terminal, the panel no longer sees the EOLR, and it signals an open trouble condition.

In case the wires are shorted, the panel will go into alarm, since this is the same condition caused by the detector when it senses smoke.

Power for the device is supplied on one pair of wires, or loop, while the detection circuit is connected to a second pair. The cable runs from the main panel, and connects to each smoke detector in the system. At the last unit, the detection circuit terminates with an EOLR, just like the 2-wire smoke.

In operation, the detection loop acts the same as with a 2-wire smoke detector circuit. The panel senses the EOLR as long as the loop is closed, and signals a trouble condition if it opens. If smoke is detected, the pair of wires is shorted, causing an alarm.

Unlike the 2-wire detector, the power loop must also be supervised. A power supervision relay is connected with its coil energized by the power loop, and its contacts in series with the detection loop.

Source for a power supervision relay.

Most smoke detector manufacturers include a wiring diagram with every unit, so you can quickly see how to make connections. It’s a good idea to leave a copy in the main alarm panel, for future reference. (This goes for any device installed in the system, for that matter). Besides the wiring diagram, the installation sheet will also contain instructions on how to test and maintain the unit.

When making connections at the last detector in the run, you’ll obviously be stripping the wire ends to attach to the screw terminals.


When making connections to a looped smoke detector location, you’ll have a loop of wire to deal with. In this case, always cut the wire. While it may be easier to simply strip off some insulation and fold the wire over, don’t do it. Why?

This leaves you unprotected, but still thinking the system is working properly. The panel is actually unable to trigger an alarm from that detector.

Had the wire been cut at the time of connection, the ends would have separated when pulled loose, causing an open trouble condition.

For tips on finding problems with smoke detector wiring, check out these articles:


For wiring at the smoke detectors themselves, see Troubleshooting Smoke Alarm Wiring.


For details on connecting smoke detectors and other devices to a typical alarm panel, see Ademco Vista 20P Wiring Diagram. 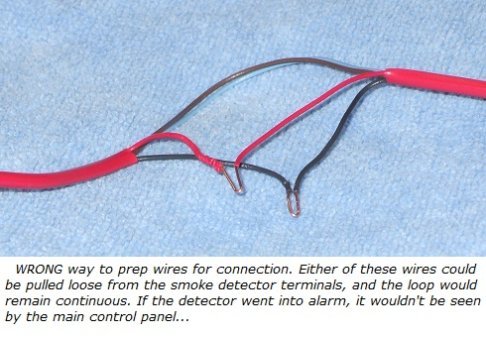 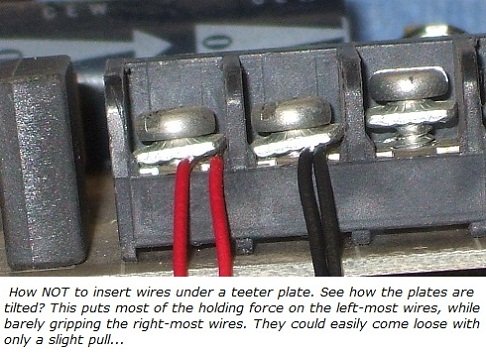 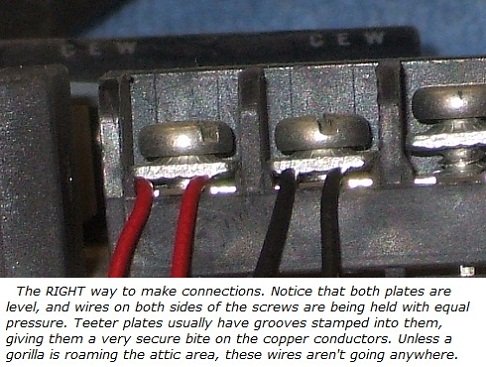 Many newer designs of smoke detector use terminal strips or detachable terminal blocks. These speed up wiring a bit, but you’ll need a fine-tipped screwdriver to tighten them.

With any kind of wiring connector, don’t over-tighten the screws. They are small enough that they can be easily stripped, making the wire forever prone to coming loose. Just snug them up good, without using your “Kung Fu” grip.

For tips on where smoke detectors should be located in a house, see Smoke Alarm Placement for Home Security Systems.

Confused by home alarm pricing? Get the inside scoop on home security prices from an experienced alarm professional.