The All In One Screwdriver

and Other Useful Screwdrivers 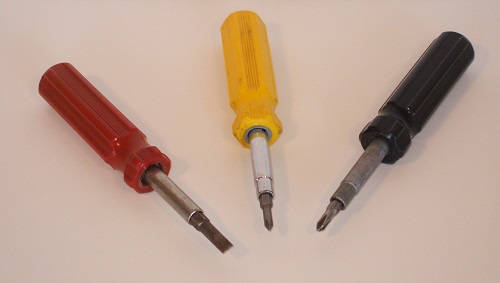 I’ve found that an all in one screwdriver, along with several other types of screwdrivers, are the best for various chores involved with alarm installation. These include:

Here is a rundown of what each of these are best used for, and why I've settled on them.

All in one Screwdrivers

6-in-1, 4-in-1, and other multi-tip or combination screwdrivers can help you to keep a tool pouch as light as possible, while still giving you good versatility. 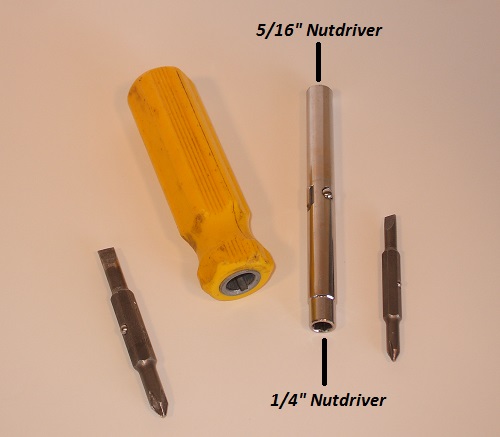 I like the 6 in 1 screwdriver because it covers the vast majority of “regular” screwdriving tasks. 6-in-1’s usually contain a small and large flat-tip bit, and a small and large Phillips bit. That’s 4 of the 6 functions; the other two are the “socket” ends of the bit holder shaft. These act perfectly as nut drivers, and on my favorite screwdriver are sizes ¼” and 5/16”.

Of course, there are also many 4 in 1 screwdrivers available. The typical 4-in-1 has similar flat-blade and Phillips screwdriver sizes as the 6 in 1, but has the same size hex socket on both ends, so you only get one size for use as a nut driver.

Since both of these all-in-one screwdrivers tend to cost the same, why not have the extra nut driver of the 6-in-1? 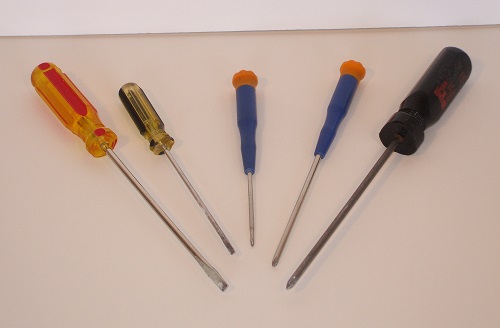 An all in one screwdriver will take care of most of your fastener work. But, certain alarm jobs are easier to do with a particular type of screwdriver that isn’t included in the combination screwdriver. For me, I’ve settled on these:

Phillips Screwdriver with a 6” long, 3/16” diameter blade. This is ideal for reaching through the mounting ears of 66 punchdown block standoffs when removing or installing them. An all-in-one screwdriver, and most standard-blade Phillips drivers won’t reach or fit through the narrow space.

Flat blade screwdriver with ⅛” blade. Small screwdrivers like these are perfect for making holes in drywall for plastic anchors; just twist and push until the blade penetrates the drywall, then wobble the blade around in circles to widen the hole enough for a snug fit for whatever size anchors you’re using.

Flat-blade screwdriver with heavy blade. I use this for general prying, chipping, bashing, or other things we tend to use screwdrivers for, so you can avoid ruining your good ones.


Pocket Screwdriver with magnet. Unlike an all in one screwdriver, which must be carried in a tool pouch, a pocket screwdriver is small enough to carry all the time. 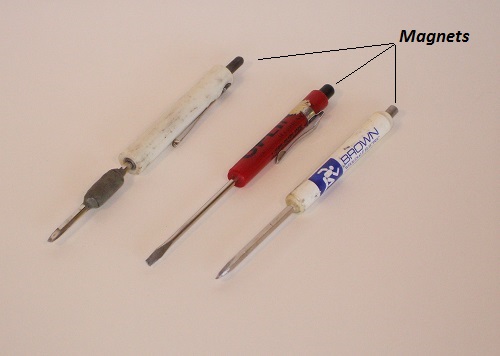 The magnet feature is especially handy for alarm work. Among many chores I’ve used mine for:

Most pocket screwdrivers have a clip. I prefer a pocket clip screwdriver with the clip molded into the handle, rather than a slide-on clip. The molded-in clip gives you extra turning force for stubborn screws, while the slip-on clip will just spin when twisted. 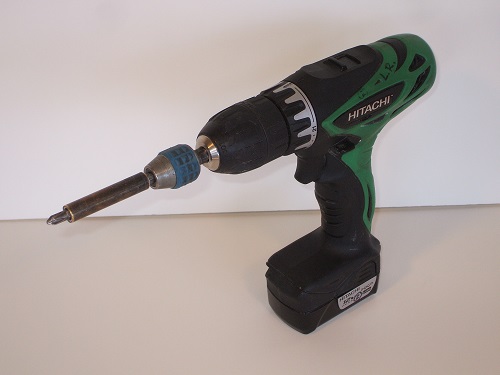 An electric screwdriver drill reduces time and effort spent on repetitive screwdriving jobs. I’ve owned and used many different types of these screwdrivers, and I’ve settled on a favorite: A Hitachi 12V cordless screwdriver.

The model DS 10DP is a two-speed cordless drill/screwdriver with surprising power for its size. The lithium ion batteries in this Hitachi cordless screwdriver will go for weeks without recharging, so it’s always ready to work when I need it to.

This Hitachi also has an adjustable clutch, which lets me drive smaller screws and other delicate work quickly without overdoing it.

While this lithium-ion cordless screwdriver does have a single, trigger-activated LED to light up the work area, it’s probably its worst feature. The LED is just above the trigger, below the chuck, so the chuck blocks almost all of the light around the tip of the screwdriver or drill in use. For drilling/driving in a darkened area, I use my Mag-Lite or other task light to see what I'm doing.

I actually own two of these Hitachi drill/drivers. I keep one of them on the truck, and the other in my home tool area. This eliminates the dreaded “where did I leave my power screwdriver?” Problem when I forget to put the home drill back on the truck.

For jobs where a Cordless Power Screwdriver isn’t enough, I always have a corded 110-volt drill with quick-change socket and screwdriver bits.

The Digital Multimeter as an Alarm Installation Tool

Using a Continuity Tester for Alarm Installation and Service

Electrician Tool Pouch And Other Tool Bags and Buckets


Return to Alarm Installation Tools from All in One Screwdriver

Return to Home Security Systems Answers from All in One Screwdriver