Wireless security monitoring capabilities are being built into more and more home alarm systems every day. This is largely driven by the fact that more and more people are relying on their cellphones, and are ditching their landline-based home telephone service. Many DIY alarm systems now use cellular reporting, and it’s also a very good choice for an apartment security system.

Wireless alarm monitoring uses a cellular network to send alarm signals to a central monitoring station, rather than using traditional copper phone lines. This not only eliminates the need for a land line phone; it avoids the threat that alarm signals could be prevented by simply cutting the phone line.

However, wireless home security monitoring comes with its own concern; namely, that a cellular jammer could be used to disrupt the transmission of alarm signals, preventing a police response to a break-in.


In this article, I’ll discuss what I see as the possible versus the realistic threats your cellular alarm monitoring system may face.

What Would an “Average” Burglar Do?

While there is no such thing as an "average" or "typical" burglar, here is what crime statistics tell us:

But what about a sophisticated thief? What could a determined burglar do?

Imagine yourself trying to have a conversation with a friend while standing next to a loudspeaker at a heavy metal concert.

You and your friend probably wouldn't be able to hear each other, since the loudspeaker would simply drown out your voices.

Cellular jammers work in a similar way by transmitting signals at the same frequency as the device being jammed, overwhelming the intended signals with meaningless noise. 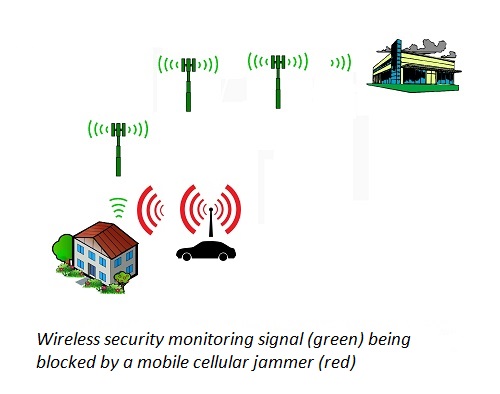 Some jamming devices can transmit at multiple frequencies, preventing several different bands of communication at once. Others can sweep repeatedly over a bandwidth, or range of frequencies to make absolutely sure they are blocking the specific frequency being targeted. 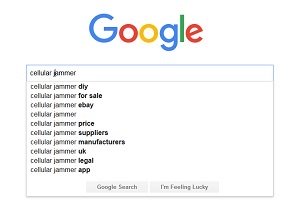 A quick internet search shows lots of jamming equipment for sale, promising to be effective at stopping signals from cell phones and other cellular devices. Jammers are available for all bandwidths in which cellular communications occur, so no cellular frequencies or networks can be considered safe from disruption.

Can Wireless Security Monitoring Be Jammed?

Controlled tests have demonstrated that it is possible to use radio jammers to defeat various alarm system communications.

With these three key factors, there is no question that wireless security monitoring signals can be blocked.


In the controlled tests mentioned above, those performing the jamming had direct access to the alarm device to be jammed, and knew exactly which frequencies to transmit on.


I have been unable to find any documented cases of a wireless alarm jammer being used in actual burglaries to prevent wireless alarm monitoring signals. As of 2014, FBI crime statistics that classify how burglaries occur don’t even list cellular  jamming as an attack method used during a break-in. This tells me that, at least for now, the use of jammers against wireless security monitoring is not a common occurrence.

That said, let’s suppose, hypothetically, that a would-be burglar did want to jam your wireless security monitoring system.

What difficulties would he face?

Just how likely is this to happen?

To start with, cellular jamming is illegal in many countries, including the United States. A thief driving around in possession of a mobile jammer in search of a target home would face some difficult questions if stopped by police. If caught actually using a wireless/cellular jammer, he could face seizure of the equipment, substantial fines, and possible imprisonment.

Granted, a thief caught committing a burglary is already facing fines and imprisonment anyway, so this fact alone probably wouldn’t be a key factor in deciding whether or not to use a cellular jammer.

Cellular jamming equipment is not cheap, at least for anything that might actually be effective against wireless security monitoring signals. Prices I’ve seen in online searches for wireless alarm jammers vary between a few hundred to several thousand dollars.

Wireless security monitoring can only be disrupted if a cellular jammer has sufficient power and  is physically close enough to the home. Most jamming equipment ads list effective ranges of from tens of feet to tens of meters.

Higher-end units are necessary for transmitting at extended ranges, and for the ability to jam signals on multiple frequencies. A burglar attempting to jam alarm monitoring would likely choose the most powerful equipment he could afford, in order to have the best chance for success.

Several wireless home security alarm manufacturers, including Simplisafe and GE, have anti-jamming features built into their cellular-equipped security panels. These systems actively detect radio signals in their own cellular band, and will then alert the alarm owner of a possible jamming attempt.

For home wireless security systems that are also set up to report over a data or telephone line, a signal can be sent to the monitoring station as soon as a cellular jamming signal is detected.

Suppose a burglar, intent on pillaging the vast riches he is sure lay hidden in that expensive-looking home in the nice area of town.

He transports his high-tech cellular jamming equipment to the intended target house and parks nearby. When all is ready, he flips the switch, powering up his top-of-the-line cellular jammer.


Being smarter than your average burglar, he realizes that his wireless jamming device will have no effect on a wired telephone or internet connection. He might also understand that anti-jamming features may already be sending an alert over those same wired connections, so he must approach the house and cut any data or phone wires leading from the house to the outside world.

At this point the land lines are cut, and pose no threat.

Theoretically, his jamming device has blocked all wireless communications into or out of the house, preventing any alarm signals from being transmitted.

But, how can he be sure?

The truth is, he can’t. Not absolutely.

He would have to consider that the panel’s jamming detection feature has alerted the homeowner to his actions, even before any entry is made into the house.


And, when he actually does break in and the alarm system is tripped, he would have to assume that SOME signal MAY get through.

So really, how effective can his cellular jammer be?


NO burglar wants to get caught, and getting in and out quickly is the best way to avoid this. At the end of the day, jamming an alarm system doesn’t provide much of an advantage over a simple “smash-and-grab” approach.

The scenario above shows what I see as the biggest weakness of trying to jam wireless security monitoring signals: there is no way to verify that it’s working.

Aside from any of these concerns, add in the fact that all alarm systems will still function locally, with an audible alarm, even if they can’t communicate to the outside world. So, from the moment of a break-in, the alarm system will be sounding an audible siren inside the home, and may also have an exterior siren to alert the neighbors.

So, in most cases, the “average” thief will most likely be a fairly unsophisticated smash-and-grab burglar, who might cut phone lines, but won’t likely go to the expense and effort of buying and using a cellular jammer. He is most likely not a threat to disable your wireless security monitoring.


How about the more sophisticated burglar? Even a careful cellular jammer user can’t be sure if his device is 100% effective. He would have to realize the risk of incomplete jamming, and would likely have to behave as if the police are on their way. And, he would certainly prefer hitting the house next door, with no alarm system at all.

Like all security measures, no burglar alarm monitoring method is totally secure.

Just as installing good locks, outside lighting, and even security bars cannot prevent all burglaries, they are still the best steps to deter the majority of attempts and reduce the chances of a break-in.

Should I Self-Monitor My Alarm System?