Magnetic reed switches are the most common devices used in modern alarm systems. Also referred to as magnetic sensors or contacts, these devices tell a security panel when a door or window is open or closed.


Reed switches consist of two metal strips sealed inside a glass tube and attached to external wire leads. When a magnet is brought close to the unit, the strips are deflected and touch, closing an electrical circuit. The alarm panel then senses this closure. 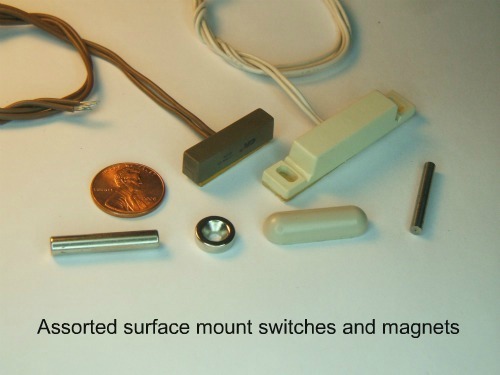 Magnetic reed sensors come in a variety of shapes and sizes. They are packaged in a plastic case designed for different mounting options. Reed switches can be recessed or surface-mounted, and come in several colors to match doors and windows.

With energy costs going up all the time, many people are looking for ways to save money long-term. Switching to more energy-efficient windows and doors is one of the best ways to do this.


Your alarm company would probably charge you hourly for open-ended work like this. Magnetic reed switches are not expensive, but the labor to remove and re-install them can be.


An “easy” house might take an alarm company two or three hours for removal of the contacts, and likely longer than that for the re-installation. They would also have to build two trip-charges into the mix. Not terribly expensive, but it’s money you’d probably rather spend on something else.

Ready for some good news?

This is probably one of the very best do it yourself alarm system projects for a relative beginner. A reed switch is fairly easy to remove and install. The job requires no experience, a small time commitment, and only the most basic hand tools. (Some situations may require a cordless drill). The heavy lifting has already been done, since everything is installed and working before you even start. You’re simply re-locating things.

Here are step-by-step directions showing you how to do this. If you’re the type who likes to look at pictures, I’ve included lots of breath-taking photos, too….

Take down any window coverings first. These come in a wide variety, from plastic and wood blinds to custom-built shutters and more.

Most mini-blinds have hinged release points on each end bracket. If there is a center bracket, it is often a snap-in affair. Be patient, and always remember: If something can be put together, it can always be taken apart! 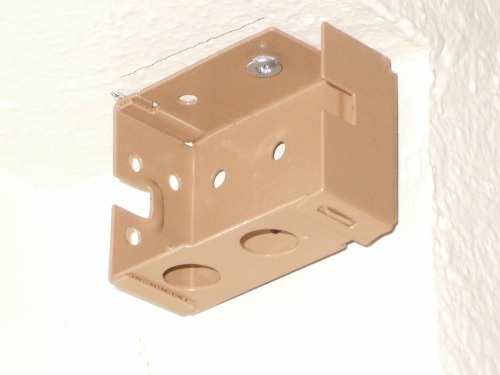 Mini-blind bracket in closed position. Release tab is at the lower-right corner of the bracket. 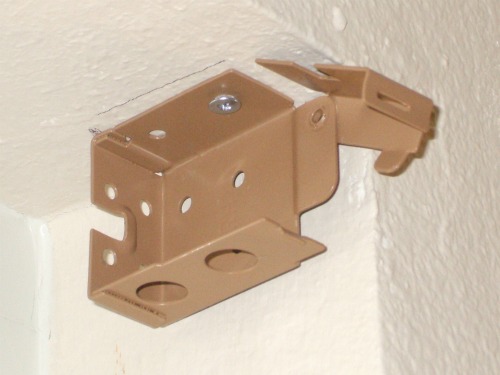 After releasing the tab, the front of bracket can swing up to allow removing or installing the blind head rail.

Gently pry the magnetic reed switches and magnets loose using a putty knife, the thinner and more flexible the better.

Switches and magnets are usually attached with screws or double-sided tape, but may also have silicone sealer or caulking too.

Magnets can take some pretty rough handling, but be careful with the sensors. The glass tubes inside magnetic reed switches will break if you use too much force. 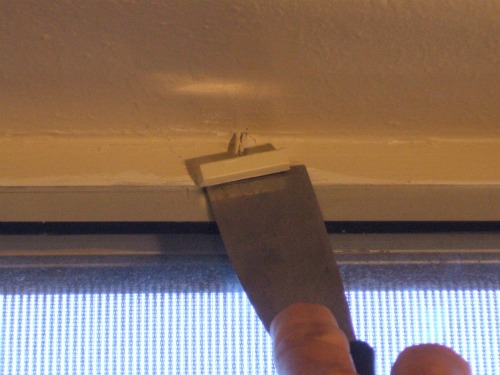 After removing the contacts, leave any adhesive tape on the parts. Use it to stick them together, adding some masking tape to make sure they don’t separate. Two reasons for doing this: 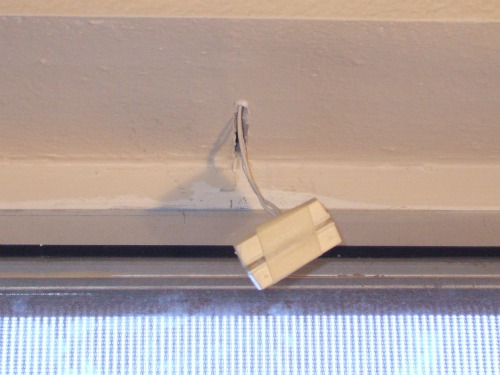 Pull some extra length on the wiring coming from the wall.

If there was a notch cut into the drywall during the original installation, it would have been covered with drywall patch. Remove some of this patch from the notch.

This allows more room for the new window frame, which will almost certainly be thicker than the old one. Grip the wires themselves, not the plastic case, or you might pull the leads out of the switch. 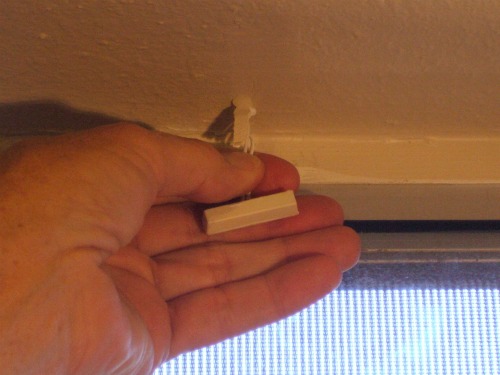 Recessed magnetic reed switches are most often used on doors, as shown in this example. If you have any recessed contacts installed in your windows, the removal procedure is the same. 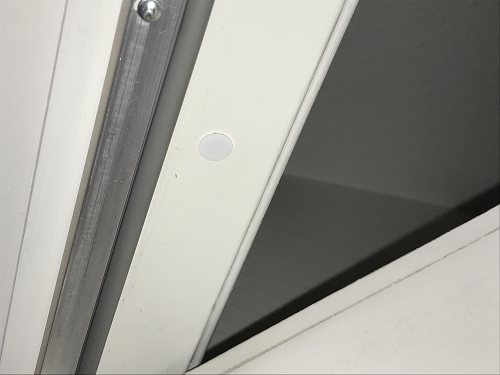 First, try lifting the switch out of the hole by prying along the edges with a thin screwdriver or putty knife. Pry gently, working around the perimeter of the switch to avoid damaging it. This will cause most switches to loosen and come out fairly easily.

If you find any that won't come out by prying, you may have no choice but to drill it and drive in a screw to pull it out. Of course, this destroys the switch, but is sometimes the only way to gain access to the wire so you'll be able to install it into the new door (or window) frame. 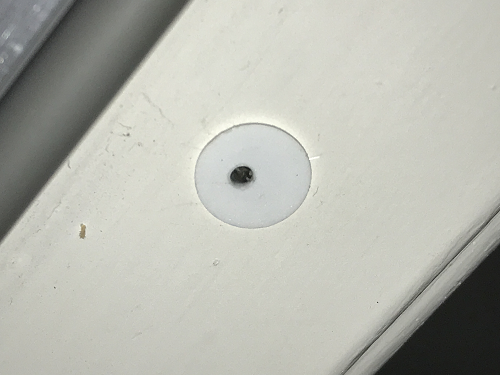 Next, drive a small screw (drywall screws work fine) into the hole on the switch until it feels snug. 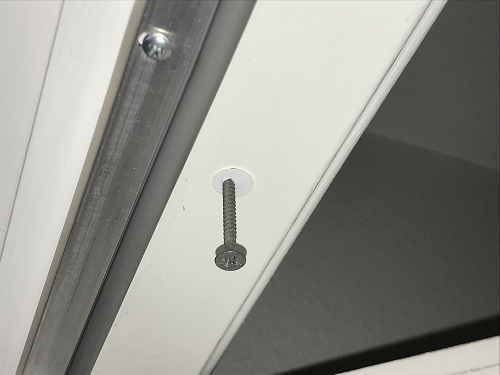 Use a pair of pliers to grip the screw. Then, pull steadily while rocking the pliers from side to side or in a circular pattern. Slowly, the switch will come free of the hole.

If the screw pulls loose from the switch, drill into the switch a little deeper, then thread the screw in again until it feels tight. Repeat the pulling and rocking until the switch is free. 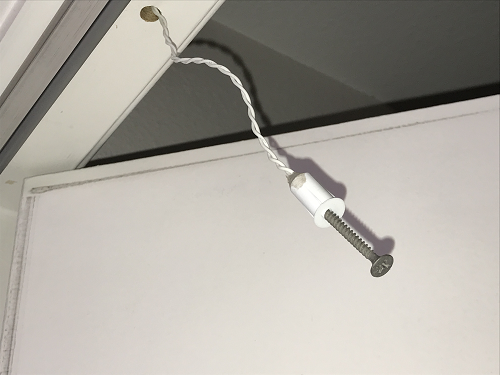 If you had to drill any switches to remove them, taping a magnet to them probably won't work. The internal reed switch is destroyed by drilling, and likely won't work with a magnet. In that case, cut the switch off of the wires, strip off about 1/2" of insulation from each conductor, twist them together, and secure with a wrap of electrical tape. This will close the loop for that switch, allowing the zone to set up normally.

You’re done with this phase of the DIY project!

The window crew will remove any brackets for blinds that conflict with the new windows. Also, today’s window and door installers tend to be very familiar with alarm wiring. They’ll bring the reed switches out where they need to be, so they can be re-attached easily.

Even though you’ve removed all sensors and magnets from the affected windows, you can continue to use your security system to protect any doors and windows not being replaced.

The switches you've removed and temporarily attached magnets to are basically bypassed. This will allow you to arm the system as usual, though the 'bypassed' sensors provide no protection.

Any doors and windows not affected by the project will still be able to trigger an alarm, providing you with a partial system until the project is complete.

When you're ready, you can move on to the next step: Reed Switch Re-Installation DIY


For some examples of window and door sensors, see this page on Honeywell Switches.