The Alarm Programming Quick Keypad Connector shown here allows an alarm technician or do-it-yourselfer to easily attach a programming-capable keypad to the four databus terminals of an alarm control panel. This is the easiest, fastest way to make on-site programming changes when the originally installed “basic” keypads don’t support it.


When using the connector, no screwdriver or other tools are needed. If you have a keypad capable of programming and access to the security panel, programming can begin almost instantly.

Like many other products, alarm equipment can often be had in “basic” and “deluxe” versions. In the security industry, this is often seen in the different alarm keypads used to arm, disarm, and operate the system. There are basic, “fixed display” keypads, as well as enhanced “alphanumeric”, or “alpha” keypads.

The difference is not just cosmetic. For many brands of alarm, notably Ademco home security systems, an Alpha 6160 keypad is required to make installer-level alarm programming changes. While the Ademco 6150 keypad with a fixed-display is fine to operate the system on a day-to-day basis, it cannot display all of the information necessary for the complete programming of the system.

Many home alarm companies will install a system with only basic keypads. The basic keypads are cheaper, and allow the dealer to offer the system at a lower cost.

The necessary installer programming is done during installation, either with an alpha keypad, which is then removed from the home site, or by remote access.


Any future programming changes can then only be made using the remote access software, or at the site by temporarily connecting an alpha keypad.

The Problem with Temporary Keypad Connections

Wiring an additional keypad to an alarm panel, even temporarily, isn’t always as simple as it sounds. Here’s why:

Most security system panels use 4-wire terminals, known as a databus, to make connections to keypads, zone expanders, output modules, and any other “smart” devices requiring data.

One problem: Most alarm panels only provide a single screw terminal for each of the four necessary connections. 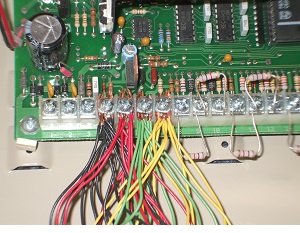 This means that alarm systems on mid-size or larger homes often have a mass of wires stuffed under the terminal screws of the data bus.


In order to attach a programming keypad, the screw terminals must be loosened, and yet another set of wires jammed into the mix. After alarm programming is completed, these temporary wires must be removed. This usually causes a few of the existing wires to pop loose. These can easily lead to short circuiting of terminals, lost or loose connections, and device malfunctions, any of which will require a call-back visit.

In addition, making the wiring connections requires using both hands, and a close-up look at the screw terminals. Since many security system main panels are mounted high on the walls of closets, this means that a ladder must be used to do the job. In my case, a flashlight and glasses are also needed...


I hate to complain (well, OK, maybe a little!), but all of this fussing around seemed like a waste of time to me. All I needed was a keypad connection for a minute or two to reprogram a few items!

My Solution to the Problem

After dealing with this situation many times, I came up with the idea for the “Alarm Programming Quick Keypad Connector”. It consists of a 6-8-foot length of 4-conductor wire, some rare-earth magnets, and a small block of sturdy foam or rubber. The foam typically used to pack electronic devices works very well for this. 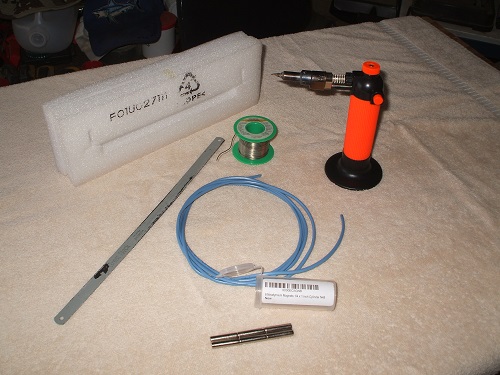 At the alarm panel-end of the wire, the red, black, green, and yellow (or white) wires are each soldered to a rare-earth magnet. The magnets used here are ¼” diameter, 1” long, and will be press-fit into holes in a block of foam. The holes in the block are spaced to match the spacing of the terminal screws (#4, 5, 6, & 7) of the alarm panel to be programmed, in this case an Ademco Vista 10SE. 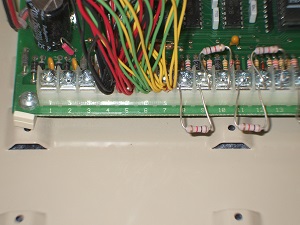 Pre-punch the holes in the foam using a small screwdriver or piece of stiff wire, to give a very snug fit for the magnets. It should be tight enough to hold them in position, but loose enough to let them attach magnetically to the terminal screws.


Rather than just soldering the wires to the magnets randomly, follow these steps for a better result:

First, clean each magnet with an alcohol wipe to remove any grease or dirt.


Second, stick the four magnets together and lay them out flat, letting them orient themselves magnetically. This will result in the magnets’ “North” and “South” poles alternating polarity with each other, which will allow them to stay aligned better in the foam block.


Now, the alarm panel screws don’t really care which magnetic poles are actually north or south, and for that matter, neither do I:) All that matters is that they alternate polarity from side to side.


Third, mark all four ends on the same side with a Sharpie or other marker. Mark the terminal number as well. This will let you know which end is which when the magnets are separated for soldering. 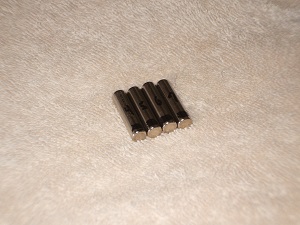 Begin soldering by “tinning” each wire and magnet with a good rosin core solder. If you’re new to soldering, tinning simply means heating a wire or connection up with the soldering iron until it’s hot enough to melt the solder.  Then, solder will easily flow onto the surface of the wire or other metal. 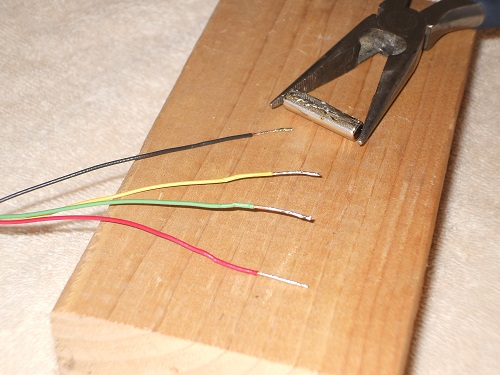 After the wires and magnets are tinned, hold a wire to the tinned area of its magnet, and apply heat along with a bit more solder. The two should join smoothly as the solder melts and flows. Remove the soldering iron, being careful to hold the wire and magnet in place for a few seconds until the joint cools. 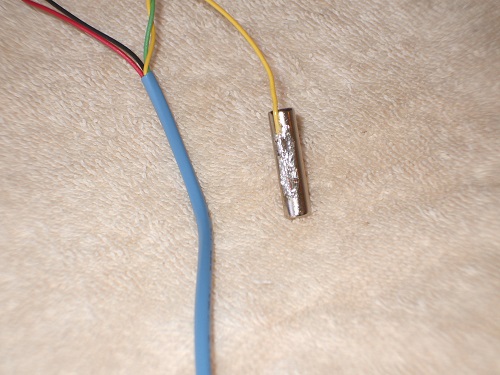 If you happen to move the joint as it cools, it will probably result in a “cold joint”, which will break loose easily. If this happens, no worries; just re-heat both parts, add a touch more solder, and try again.


After all of the magnets have wires attached, they can be installed into the foam or rubber block.

The ¼” diameter magnets I used were too large to fit in the foam block without splitting it apart. I had to switch to using a rubber eraser for the block, pre-drilling holes with a drill press.

If you decide to do this project, use 1/8” rare-earth magnets instead. They will fit much better in the foam, and are plenty strong enough.

As a side benefit, 1/8” magnets will be much easier to heat up for soldering! 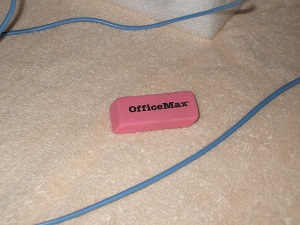 Be sure to insert the magnets into the block in the correct order. Match the color code of the wires to correspond with the plus (positive), minus (negative), and data in/out terminals of the panel. I used colored markers on the block to make it easy to see which terminals are which. 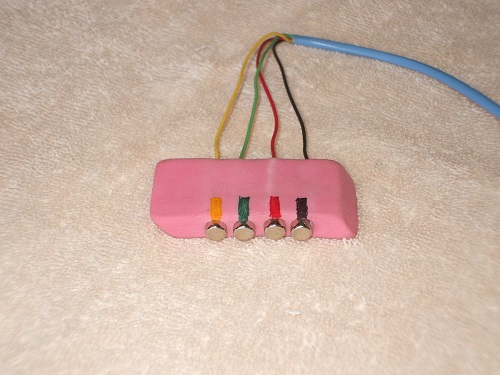 To preserve the strength of the rare-earth magnets, as well as maintain the shape of the block, you can make a “keeper”. This is just a short length of ferrous metal that the magnets stick to when not in use. A piece of worn-out hacksaw blade with the edges ground smooth works nicely for this, thank you. 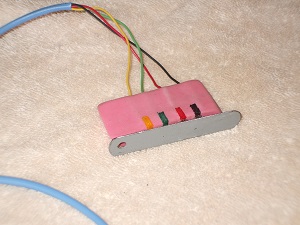 The Ademco 6160 keypad I used has screw terminals on it, so the keypad end of the 4-wire connects to these. If the security alarm keypad you’re using also has its own screw terminals, just connect it following the color code as usual. 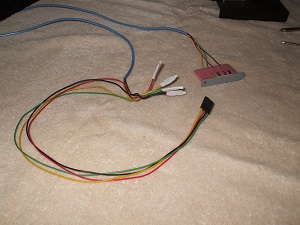 Some other brands of alarm system keypad use a plug-in 4-pin keypad connector. If you have one like this, just attach the keypad-end of the 4-wire to the keypad connector leads using regular “B” crimp connectors or wire nuts.

To use the quick alarm programming connector, make sure the keypad is securely attached to the 4-conductor wire.


Next, position the magnets in the foam/rubber block directly in line with the alarm panel databus terminals. Match the color-coding on the block to the wiring already attached to the terminals.


Note that this doesn’t require two hands to perform, just one to reach the terminal strip. Also, you likely won’t need glasses and a flashlight to make the connection. Just identify the wire colors under the databus screws, move the block close to the terminals, and let the magnets pull the block until they make contact with the screw heads. 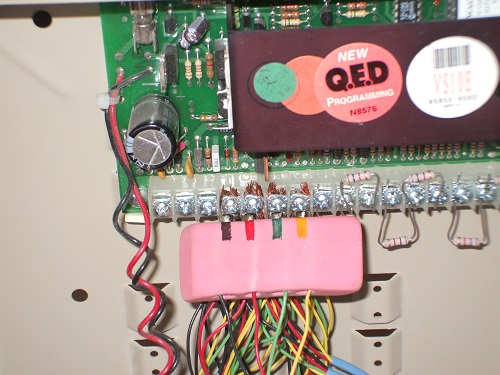 The keypad should light up at this point. If it doesn’t, check that all four of the magnets are firmly touching their respective screw terminals. If not, slide the magnets in or out of the block until all of them can make contact with a screw head.


Once the keypad has a good connection on all four terminals, alarm programming can begin. The 6-8-foot length of the 4-conductor wire should be enough to allow comfortable handling of the keypad without the magnet block pulling loose from the terminals.


After you complete the needed security system programming and are satisfied that all is well, just pull the magnet block away from the alarm panel to remove it. Attach the magnetic keeper, and you’re done!

This little keypad wiring adapter has saved me a ton of time and aggravation when doing alarm programming changes on Ademco home security systems, in particular.


By adjusting the magnet spacing, you can adapt this idea to suit any make or model of security panel you either own or work with often. Please do make sure to match the pin-out of the keypad wires to that of the panel you’re connecting to.


As mentioned earlier, you should learn from my mistake and use 1/8” magnets to build this adapter. Not only are they are easier to fit into a foam block, but there is another benefit:


Some brands of panel, such as DSC security systems, have small screw terminals spaced closely together. Using 1/8” diameter magnets will allow you to match the narrower screw spacing on the DSC alarm system. You will likely need to use rubber, rather than foam, due to the tighter spacing.


I hope you find this quick alarm programming connector as useful as I have!

See this page for more information on Alarm System Keypads.