The Moose alarm systems Z1100e was one of the most versatile panels in the Z1100 line. The “e” stood for “enhanced” if memory serves, to indicate improvements over the earlier Z1100 models, the Z1100 System I and System II. Unlike the 1100’s, the Z1100e added zone expansion capability and support for Z1100ST LCD keypads.

These Moose security systems were widely used in the 1980’s and ‘90’s, but have been out of production for some years now.

If you still have a Moose Security Systems Z1100 System II or a Z1100e, this page will serve as a guide for programming the user and programming codes.

I’ll also explain how to access programming mode even if you’ve forgotten your code, or the codes are unknown.

If you have a Z1100 System I, the code programming has some important differences. For this system, follow the instructions in the “Install” manual. You can download a free copy using the “Z1100 - System I” link at the bottom of this page.

If you have a Z900, see Moose Security System Z900 Code Programming.

To identify which Z1100 model you have, open the main control box. Check the faceplate of the main circuit board for the following:

LED keypads are used for the earlier Z1100 panels, while the Z1100e can use either the LED keypad or the much nicer LCD version. 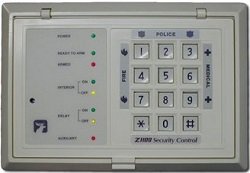 The Z1100R is the standard LED Control Station for Moose alarm Z1100-series panels, and the only one that can be used on the Z1100 (non-e) systems. It is 4-wire unit, and uses an 8-LED (Light Emitting Diode) display to indicate system status, armed state, etc.

The Z1100ST is an enhanced control station that is only supported by Z1100e panels. It is a 4-wire unit, with a 2-line, 48-character LCD (Liquid Crystal Display). The display has an adjustable electro-luminescent, blue-green backlight. In its day, it was definitely one of the better looking alarm keypads made. 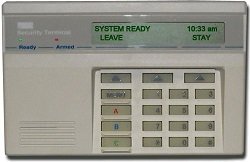 The Z1100ST uses menu-driven prompts to help guide you through its operation. The “Menu” button brings up a series of options in the display, each centered above one of three “Soft Feature Keys”. Pressing the soft-key selects the option being displayed.

The Moose Z1100 System II and Z1100e each have (17) User Codes available. These codes are referred to as “Personal Authorization Codes”, or PAC’s. Each PAC can be from 1 to 5 digits in length, and is used to arm and disarm the system, and perform other functions.


Code number 17 is designated as a “temporary” or “usage count” code. It will function the number of times programmed in location 19, after which it will stop working until a new value is set in location 19. This code is typically given to a babysitter, repair person, etc. so they can operate the system when they need to, but won’t have access after their visit.


Code number 18 is the “Program Authorization Code”, and is used to access User Level and Installer Level programming modes. It has the authority to change itself, and any of the user codes.

If you subscribe to a central station monitoring service, consult your alarm company before doing any programming yourself.

While most security companies allow you to change your own codes, some don’t.

Also, it’s a good idea to call your alarm monitoring service before doing any programming.

They can put your system on “test” status, to avoid a police dispatch if you accidentally set the alarm off.

1. Press the “9” key, followed by the Programming Authorization Code (Factory default is “98765”.) All LED’s will flash, indicating entry into programming mode.

4. Press the “*”(Store) key to Save the new code and exit programming mode.


If all went well, test your new code by arming, then disarming the Moose alarm (You’ll have to close all doors and windows to get a green “Ready” light.)

Does the code work?

1. Press the "Menu" key 3 times to obtain user menu 3. The Menu key is the triangle with an underscore, just above the "A" emergency key.

2. Press the soft feature key under the "Program" prompt.

5. Press the softkey under "Control Panel".

7. Press the soft key under "Find". The code user number will be displayed, along with the actual digits of the current code.

9. Press "Store" to save the code and exit programming mode.


If the keypad doesn’t indicate entry into the programming mode, you may have missed a keystroke. Repeat Steps 1-3. If the display doesn’t show "Control Panel / Keypad / Quit", you may have an invalid program code. If so, read on…

If the Program Authorization Code is unknown or invalid, you can re-program it using the method below.

Sorry, time for another Caution!

The following steps require entering the Installer Programming level, which has access to ALL functions of the alarm panel. On Moose alarm panels, this area of programming can be complicated.

Be aware that a mistake here may cause the system to be inoperable. If this happens, it will likely need to be re-programmed by a professional alarm technician.

If you’re not comfortable trying this yourself, I highly recommend that you contact a security professional to do it for you.

With that out of the way, here are the steps. If you do make a mistake while entering digits, press the “*” key several times to exit programming mode, and start the steps over from Step 1.

To help avoid errors, read through everything first, and decide what you'd like the new PAC to be before you begin.

1. Open the Moose alarm main control box. Locate the Power Switch, in the lower left corner of the circuit board. Slide the switch down to turn it "Off".

3. Press and hold the Program Switch while turning the power switch "On". The control will then power up in program mode.

Next, go to a keypad:

6. Press “*” twice to save and exit the programming mode.

6. Press “*” twice to save and exit the programming mode.

As you add codes for different users of your alarm system, I recommend writing down a list. Include the name, user number, and the actual code digits. Keep this list in a safe place, and refer to it any time you need to add or remove a user or code from the system.

The information above should cover most of your Moose alarm code programming needs. For complete alarm programming instructions, system operation, and use of both LED and LCD keypads, see the links to manuals below.

Note: The Z1100 System I uses a blue "diaper pin" style program switch, labelled "Program" and "Prog. Sw.", instead of a button. This is located on the middle-right side of the main board.

“User” manuals cover how to operate a system day-to-day.

The alarm installation manual, or “Install” manual, will contain everything you need to know about programming a system.


Need a new plug-in transformer for your Moose system? Find it here.

If you have a Z900 system, see this page on Moose Security System Z900 Code Programming.